Watch out for Reindeer Games

You may want to think twice before you let your kids wait up for Santa’s reindeer this winter season.  A recent letter in the New England Journal of Medicine by Dr. Boris Kan of the Karolinska University Hospital in Stockholm, Sweden documents the unfortunate case of five children who developed painful skin lesions and ocular complications after visiting reindeer herding areas in subarctic Norway and Sweden.

Reindeer, which are of the same species as North American caribou, are known to harbor the larvae of a fly called Hypoderma tarandi, also known as the Warble Fly.  In one of those “you can’t make this stuff up” bits of grossness from the natural world, this fly which is something like a bumblebee, lays its eggs in the hair of its host.  The larvae burrow under the skin like a hypodermic needle, as suggested by its name, then when the  larvae mature, the fly breaks through the skin into the outside world.  This type of infection is known as myiasis.

Some patients with myiasis can develop what is known as ophthalmomyiasis which is infestation of the eye and ocular structures with this organism.  The larva finds its way into the eye where it causes an intense inflammatory reaction.  This inflammation, while serving the important purpose of fighting the infection, can also have a very damaging effect on the eye and eventually cause blindness. 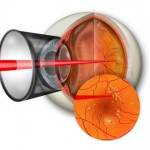 For all those in the North Carolina (Durham, Raleigh, Chapel Hill) area, there is no need to worry.  If caught early enough, it can be effectively treated by an ophthalmologist at North Carolina Eye, Ear, Nose & Throat, in which the most common technique is laser photocoagulation.   Laser photocoagulation is when a laser is used to finely cauterize ocular blood vessels to attempt to bring about various therapeutic benefits.  So if you are having floaters and have been around Reindeer, then give us a call and set up an appointment.

So if you’re waiting up and intently listening for the sound of hoofbeats on your rooftop consider staying in bed and letting Santa do his business.  He’ll eat the cookies you left out for him, leave some gifts for you to enjoy on Christmas morning and be on his way without you risking a truly nasty (and let’s face it gross) infection.