Wavefront technology: creating a 3-dimensional map of the surface of the cornea.

Or is that “Life’s a Wave?” Well certainly, “Life’s a Beach” is beginning to be a lifestyle for many northern hemisphere coastal dwellers this time of year. But I think we meant what we said, that, Light’s a Wave—as in Wavefront Custom LASIK.

But we have to be careful when we’re getting into the semantics of “light is a wave.” We may have to say, “Behave,” in the manner of America’s (I mean Canada’s) greatest comedian of all time Mike Myers—we may have to say, Behave, to light itself.

Because when it comes to Wavefront technology in LASIK, we want to control how light behaves, or at least know how it behaves. For sometimes light behaves like a wave, and other times like a particle (we won’t go into that right now, though). (Image source: http://www.allaboutvision.com/visionsurgery/custom_lasik.htm.)

Of course, readers of this blog are well educated in terms of light time and light—lasers, remember—are light. LASER = Light Amplification by Stimulated Emission of Radiation. We’ve learned about the femto-second laser used in IntraLase, and the Excimer laser. So, yes, time and light are of paramount importance in LASIK. 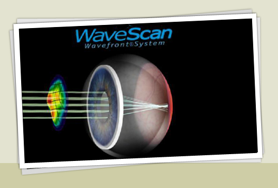 With Wavefront we actually have to back up one step in the LASIK process. We have discussed the sequence of the IntraLase first and the excimer second, in the LASIK procedure. But there is a step before IntraLase—Wavefront, which involves related terms like Wavescan, CustomVue, etc. And this is the step where “Light’s a Wave” plays a big-time role.

At this step, a highly special light wave propagates (shines) into the patient’s eye, through the cornea, just for an instant, and then that light wave bounces (reflects) back to the Wavefront screen, where that reflected light wave registers as a 3-Dimensional map of the surface of the patient’s cornea. This map shows the LASIK surgeon precisely how to calibrate the excimer laser for the most beneficial outcome for the patient’s vision. (Image source: http://www.westernlasereye.com/custom-wavefront-treatments.html.)

So as a first step, prospective LASIK patients may want to be sure their LASIK surgeon employs WaveScan, CustomVue, Wavefront, etc., technology. (For further reading:http://www.visx.com/professionals/visx_technology/wavescan_overview.php.)