Whether it’s LASIK, cataract, or other sight-improving treatments, eye care has come a long way from the pioneers in the 1800s who gave us the monocle, the eye chart, and magnifying glass. Today, we stand on the shoulders of giants, who made it possible for us to see clearly what they only envisioned might be possible.

When it comes to LASIK vision correction surgery, we speak in terms of the Fourier Series and the femtosecond – the shortest unit of measureable time (one-quadrillionth of a second). This is how precise eye care has come. No longer is it the case that the vision of only one eye can be corrected, by a monocle. Now, in only a few minutes, the vision of both eyes can be improved to 20/20 by LASIK. Today we are able to measure your vision 25 times more accurately and independent of your feedback – just in case you’ve ever wondered if you were answering the question “Which line is clearer?” (on the eye chart) correctly.

In this blog we are going to focus on LASIK vision correction and the results this treatment has given the 2012 World Series Most Valuable Player, Pablo Sandoval, who hit three homeruns in one World Series game, tying the record set by the legendary Babe Ruth! 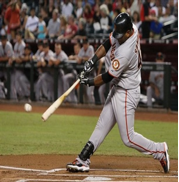 Although we will refer to him as “Sandoval,” his San Francisco Giants teammates endearingly call him “Panda,” what with his resembling the character “Po” in the animated film Kung Foo Panda. After the 2011 season, Sandoval had LASIK surgery performed on his left eye, to see if it would help his batting performance. He said if it helped he would have the treatment on his other eye after the 2012 season. When the 2012 season began, Sandoval said he could see the ball better than he ever could with contact lenses or eyeglasses, and see the ball better he did! Here are his 2012 regular season batting stats:

As Sandoval said, if the LASIK for his left eye was successful in 2012, he may have the procedure for his right eye as well. If so, we can only imagine how much better he will be seeing the ball next year!

The Solution that LASIK Offers

At NCEENT, we have many patients whose sporting life drives them towards the solution that LASIK offers. We get to know not just the intricate details of your eyes, but we also make sure we know exactly what activities you are involved in, so that we are able to share with you the options for improving your visual world. For example, if you are an archer and you use your right eye for aiming – that is essential information and allows us to customize your outcomes. Email or call us for more information on our next seminar or to schedule a complimentary visit with one of our amazing docs!